A Little Old Lady and the Fruit of Godly Sorrow 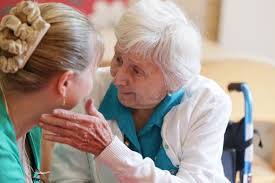 Recently I’ve been reminded several times of various situations, or particular patients I’ve taken care of, when I was a nurse. Maybe it’s because as a stay at home mom part of me misses my former job. Or perhaps it’s because these things had such an impact on me. I’ve written here about a particular patient who was diagnosed with cancer. I’ve also written here about watching a man die.

However, today I’m particularly reminded of something a little more humorous (haha, humorous…I’m an orthopedic nurse…get it!!!?). I was bathing an elderly male patient once (the types of things you get used to when you are a nurse…I’m telling you!) when another patient on the unit, an elderly woman, took a detour from her walk with physical therapy to start banging on his door, shouting for her sister. Now obviously she had dementia, and was quite adamant that “Louise” was in this man’s room. I had to bar the door to keep her from barging in. The poor man shouted, “I’m not Louise!!! I’m a man!” and asked me to “Please, don’t let that crazy woman in!”

After much coaxing, several nurses managed to get her to sit in a chair in the hall (where she subsequently tried to trip me when I walked by later.)

I still laugh when I think about that memory. The sad part is, later when she became more lucid she surprisingly remembered her hilarious (yet embarrassing) behavior and was mortified. She apologized to all of us, particularly to me for trying to trip me when my hands were full of meds.

Why do I want to write about this incident? How often do we ourselves, who don’t have a medical condition, act in ways that are sinful, embarrassing or even shameful, yet make excuses for our behavior? Or perhaps we don’t make excuses; yet we are too ashamed to admit the truth.

For this woman, her embarrassment led to repentance; it was heartfelt and real. She didn’t gloss it over, make excuses that she had the beginning stages of dementia or strong narcotics in her system. I was struck by the fact that she refused to allow her condition to justify her actions.

Yet I do the exact opposite all the time. When I’m impatient with my husband it’s because "I’ve had a long day." When I yell at the dog for chewing one of my son’s toys, it’s because I’ve "told her a million times not to." When I whine and complain that my pregnancy is hard, it’s because, well, I’m pregnant! These things are easily justified in my mind and I often feel no need to repent of them, or even the decency to feel godly shame.

My sin doesn’t need excuses or justifications. My sin requires repentance, and by God’s grace, I’m now justified by the power of Christ’s blood. So thank you, little elderly woman who tried to trip me. You reminded me of the Gospel that day.