A Tale of Two Rivers: Charlie Hedbo and the Baptism of Christ

Can any city capture the Western imagination quite like Paris? For centuries, the “City of Lights” has been a beacon for intellectuals and artists, the setting for many masterpiece novel and movie, a home to great saints and notorious sinners. To say “Paris” is to evoke thoughts of romance and beauty and culture and heroism (and, of course, incredible food). Along the river Seine you can find architectural marvels that will simply steel your heart: in my own life, I can say that the only time I’ve been reduced to tears by a building was when I first set foot in Notre Dame. New York or Rome or London may rival her for political and economic importance, but it must be said that Paris is unrivaled as the capital of Western culture.

Yet rather than beauty or light, the banks of the river Seine overflowed with tragedy last week. The world watched in horror as terrorists stormed the headquarters of the satirical magazine Charlie Hebdo and ruthlessly murdered a dozen people. The events that unfolded were shocking, and people around the world are in mourning with Parisians.

And yet, as we mourn the evil that took place, let us not romanticize the magazine itself: Charlie Hebdo is remarkable for the vulgarity and tastelessness of its content. The “artists” who were slain weren’t exactly destined to be showcased in the Louvre: they dealt in the kind of cartoon that would make the 8th grade boys I teach snort with delight, even as they looked over their shoulders to make sure their mothers weren’t in the room. The cartoons that enraged the terrorists were, in fact, offensive, and downright unbecoming of a “City of Lights.”

As Christians, I think we can say with a fair amount of certainty that the cartoons were the sort of thing that oughtn’t have been made in the first place, if for no other reason than for the fact that they amount to crude jesting .and contained a fair amount of mean-spiritedness.

But we see, once again, how dreadful it is when man takes it upon himself to purify the world. Jihad makes about as much soteriological sense as the Communist revolutions that tried to rid the world of economic injustice, but resulted in the loss of millions of lives in the 20th century. When man tries wash away sin by his own power, death and sorrow follow close behind, for we are drowning in sin ourselves. Our own efforts at salvation are truly dreadful, and often bring about more pain and sorrow than the evils we try to wash away.

As I have prayed this last week for those living along the river Seine, my thoughts have also turned to another river… You see, this is the time of the year when Christians have traditionally celebrated Jesus’ baptism in the river Jordan.

The Eastern Orthodox Church celebrates Theophany (the feast of our Lord’s baptism) on January 6th. It has often been called “the Feast of Lights.” To Orthodox believers, Theophany is actually the second most important holy day of the Church calendar, right after Easter. For it was at Christ’s baptism that God revealed Himself as Trinity…

It was also at His baptism that Christ began His public ministry, a ministry which would culminate in the events that bring salvation to mankind.

In many icons of His baptism (see below), Christ is depicted as standing on—and thus triumphing over—the doors of death and Hell. As John the Forerunner baptizes Him, we see the Sea and the River Jordan—personified in the small, strange creatures towards the bottom of the icon—fleeing in terror at the sight of their Creator. This is a reference to the Messianic prophecy: “the sea saw and fled, the Jordan turned back” (Psalm 114:3). 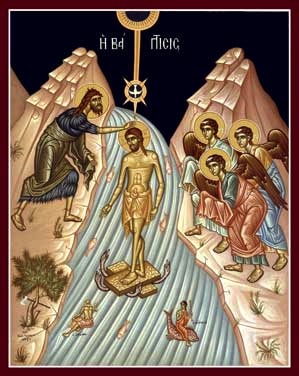 (Eds. note: there is a significant amount of theological confusion and debate regarding the use of icons in the church.  For a broad, Eastern Orthodox explanation of what icons are and why they important, read this.  For a Reformed article about the concerns, as well as the value, of icons, read this.)

From an Orthodox Theophany hymn:

"Be thou ready, Zabulon; prepare thyself, O Nephthalim. River Jordan, stay thy course and skip for gladness to receive the Sovereign Master, Who cometh now to be baptized. O Adam, be thou glad with our first mother, Eve; hide not as ye did of old in Paradise. Seeing you naked, He hath appeared now to clothe you in the first robe again. Christ hath appeared, for He truly willeth to renew all creation."

And elsewhere in the liturgy we have:

"The River Jordan receded of old by the mantle of Elisha when Elijah ascended into heaven; and the water was separated to this side and that, the wet element turning into a dry path for Him, being truly a symbol of Baptism, by which we cross the path of transient age. Christ appeared in the Jordan to sanctify its waters."

In these strange juxtapositions—the Feast of Theophany with the Charlie Hebdo massacre, the “City of Lights” with the “Feast of Lights”, the river Seine and the river Jordan—I have found a much-needed reminder of the futility of man’s efforts to save himself, to make himself great, to rid the world of evil…

Salvation comes only from the Triune God, Father, Son, and Holy Spirit. Jesus alone can renew the face of the Earth, and drive out the sin and darkness from the human heart. In His baptism, the Light of the World reveals Himself as the only one who can wash away our sins, and so free us from the evil that would drown us all.

It's the End of the Year (As We Know It)