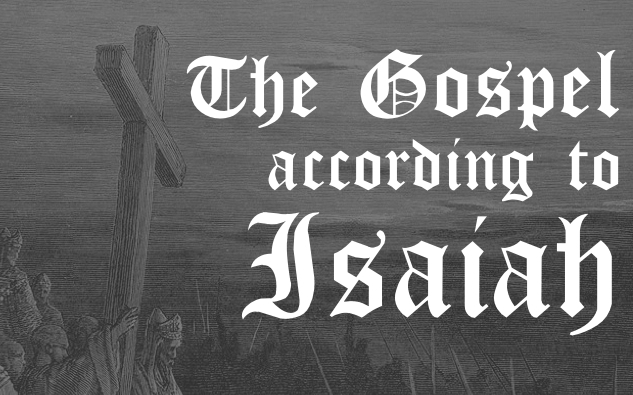 Eds. note: This is the last post in our "Atonement Theory Week" that began last Tuesday.  To catch up, read Jake's post about "Christus Victor" and both parts of Ryan's post about Recapitulation.

Before I jump right in to a discussion of penal substitution, I wanted to mention that contemplating our salvation is a glorious use of our time and I would encourage anyone reading these summations to dive in and study all of the these formulations in greater depth. Study their history, the arguments surrounding the usefulness of each, why some theologians don’t like this or that theory, etc.  It will lead you to dwell on the majesty of God’s wisdom and the greatness of His love, clarifying how your day-to-day struggles fit in to God’s great plan.

So let’s dive in.

Penal substitution refers to the idea that the atonement can be understood as Jesus Christ taking the place of sinners by suffering crucifixion and death as the just punishment for their sin, freeing them to be reconciled to God.

Penal substitutionary atonement (PSA) was originally formulated by Isaiah, making it the oldest theory of the atonement. (That’s a little thing we Protestants like to call a history lesson.)

More seriously, PSA was explicitly developed into a theory of the atonement by the Reformers. Some try to trace it back to Anselm, but I think it’s safe to say that while his view was influential, it is more properly understood as a satisfaction theory, not penal substitution. This is not to say that aspects of penal substitution were not discussed or considered by the early church fathers (check out this link for a summation) but it was not a dominant, thoroughly developed concept in their writings. It wasn’t until Luther and Calvin that PSA took off and became fully developed.

I believe PSA has robust biblical support. Isaiah 53 is rich with language that is both substitutionary and penal:

Surely he took up our pain  and bore our suffering, yet we considered him punished by God,  stricken by him, and afflicted.  But he was pierced for our transgressions,  he was crushed for our iniquities; the punishment that brought us peace was on him,  and by his wounds we are healed.  We all, like sheep, have gone astray,  each of us has turned to our own way; and the Lord has laid on him  the iniquity of us all.

Romans 3:23-26 describes God presenting Christ as a sacrificial atonement and that “He did this to demonstrate his righteousness, because in his forbearance he had left the sins committed beforehand unpunished— he did it to demonstrate his righteousness at the present time, so as to be just and the one who justifies those who have faith in Jesus.”

In other words, sins beforehand had gone unpunished, but righteousness demanded that it be rectified in order for God to be both just and the justifier. 2 Corinthians 5:21 is most commonly used to teach imputed righteousness, but it certainly describes a substitution. Christ takes on our sin (and suffers and dies, which is what we deserved), and we take on his righteousness. Galatians 3:13 describes Christ accomplishing our redemption from the curse by becoming the curse for us.

But let’s set aside individual sections and consider how solidly biblical the logic of penal substitution is, given how clear Scripture is in regards to retribution. The following is a lengthy quote of Herman Bavinck that I stole from Derek Rishmawy’s indispensable blogpost defending PSA (I will borrow heavily from the same post when addressing some criticisms of PSA in the next section, and would recommend every one read the whole thing). Take a look at this:

Given how fully developed the concept of retribution is and how it relates to God’s justice, it is hardly surprising that the author of Hebrews points out the futility of the blood of bulls and goats and sheep to actually atone for sin.  The Lamb of God was needed for final propitiation (Romans 3:25). Such propitiation was clearly needed, as evidenced by the foreshadowing at numerous points in the Old Testament (Exodus 32:7-14 among others demonstrates God as withholding wrath, for a time. But that such a wrath existed is evidence of the God’s just righteousness which would not allow him overlook sin.)

There are plenty of criticisms of PSA. As I said before, check out Derek Rishmway’s blog post for some excellent responses. I am going summarize some of the main criticisms here and offer possible responses.

It should certainly give us pause, and it’s probably the strongest argument against PSA, but I don’t think it is a clinching argument.  I am a Protestant after all.  I think there are two things to keep in mind here.  One is that the major writings of the early church fathers often were in response to the heresies of the day. The Trinity got a lot of attention and careful thought and writing because of the battles over the divinity of Christ, for instance. Also, I linked to what I think is a well-researched paper arguing that it is going too far to say that discussion of the penal aspect of the atonement is absent from the writings of the church fathers. We need to determine if it wasn’t developed thoroughly by the early church because it was an invention of the reformers, or if it was underdeveloped because it was an uncontroversial and pastorally-secondary issue at the time. Even if it is the latter it’s worthwhile to ask why that would be the case.

No. Take it away Mr. Rishmawy:

"Also, it should be said here that the judgment of the cross is not simply about God matching up ounces of suffering according to some pecuniary punishment scale. It is about Jesus suffering the final, ultimate judgment of alienation on our behalf. Instead of thinking about it in terms of units of suffering matching up for sins, think of it in terms of total exile and alienation. Sin ultimately alienates and cuts us off from God in a total sense. We reject God and so in his judgment God names and answers our sin by handing us over to the fate we have chosen: exile from the source of all good, life, and joy, which is simply death and hell. This is what Jesus suffers on the cross on our behalf. He takes that situation of total alienation and damnation upon himself.

What’s more, retribution can be part of a broadly restorative aim. Christ’s penal death was not simply a strict act of retributive justice whose sole aim was to satisfy God’s wrath or a strict, economic tit for tat exchange of punishment for sin. God could have had that by simply leaving people in their sins so that they might pay out their just wages, death (Rom. 6:23a). Instead, God’s atoning act through the cross transcends strict retributive exchange, not by ignoring, but by fulfilling the claims of justice and pushing past them to the gift of God which is eternal life in Christ Jesus (Rom. 6:23b). God did not simply want to deal with sin; he wanted to save sinners. God did not only want to be vindicated as just, but instead wanted to be both “just and the justifier of one who has faith in Jesus” (Rom. 3:26). Wrath is dealt with to be sure, but it is dealt with in Christ in order to clear the path for the gift of the Spirit that enables believers to live new, reconciled lives now which will issue in the final total restoration through the gift of resurrection."

This type of reasoning betrays a very strange understanding of the Trinity, in my opinion. God the Son was not somehow forced by God the Father to do something He didn’t want to do. Each member of the Trinity is co-equally purposed to graciously save sinners through the incarnation, birth, life, death, and resurrection of the Son. The Son willingly laid down His life. The "abuse" came at the hands of sinners whom He came to save.

Much more could be said. There are more lines of biblical reasoning to support PSA, more objections that I didn’t mention, and more glorious truth to mine. Peter, in his first epistle, draws attention to the exemplary nature of Christ’s death. Then he says this, “He committed no sin, neither was deceit found in his mouth. When he was reviled, he did not revile in return; when he suffered, he did not threaten, but continued entrusting himself to him who judges justly. He himself bore our sins in his body on the tree, that we might die to sin and live to righteousness. By his wounds you have been healed. For you were straying like sheep, but have now returned to the Shepherd and Overseer of your souls.”

Whether or not you believe Peter and Isaiah are talking about PSA or not, we can all agree that as Christians we can follow the example of our Savior and entrust ourselves to him who judges justly. He has always, and will always, do what is right.