Being Needy Qualifies Me to Be Needed

Cory ran onto the court beaming from ear to ear. It was his moment. He knew he was the least valuable player but his team was up by a lot and it didn’t seem he minded only going in when his mistakes wouldn’t result in a a loss. He was more interested in winning than in playing, because even though he hadn't scored a single point all season the guys still welcomed him into their victory huddle in the middle of the court after the final buzzer.

Today would be different. With only seconds left on the clock Cory scored his first basket. The huddle included his teammates hoisting him on their shoulders; he stretched his arms high as his mom and coach wiped away tears on the sideline.

Everyone in the gym was moved. It was clear to all that Cory had some challenges and all were cheering for him. His teammates were joyfully sharing in his triumph. For a few precious moments Cory felt needed and valued.

The truth is we are Cory. We have “special needs” — we’re flawed, broken and sinful. We lack coordination when interacting with others. We don’t always know or demontrate the "game rules" of loving others well. We fall and tempt others to fall. We say and do hurtful things, even when we’re trying to help. We too often turn others' difficulty or suffering into advice-giving opportunities rather than comforting encounters when words are best kept to only a few. We preach and pontificate rather than empathize and shoulder. We judge, criticize and sniff out weaknesses in others while too often minimizing our own flaws. We become angry, resentful and self-pitying.

I’m not comparing Cory’s special needs to our human brokenness. But the reality is this: we are all both needy and needed. 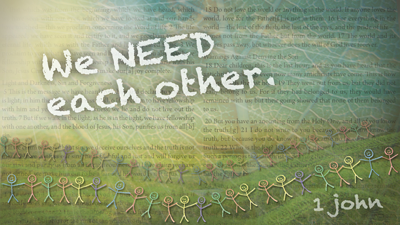 It’s way better to be needed. Over the past few months I have met with several ladies who asked to talk through painful situations in their lives; things they had never talked over with anyone. I walked away from each encounter feeling both the weight of their suffering and the humility of being handed what David Pawlison calls the “fine china” of a person’s life. When someone hands you something fragile and of great value you want to handle it carefully…very carefully. Feeling needed in some fashion by them has been meaningful. They didn’t really need me — there are others they could have chosen to whom they could open their wounded hearts. But they chose me and it was humbling.

It’s harder to be needy. Like a few weeks back when a friend and I talked about my pattern of idolizing change in another’s life rather than keeping a rightful focus on change in me. I felt my weakness and experienced the “faithful wound of a friend” (Proverbs 27:6). Neediness reveals a different breed of humility than being needed. My friend’s gracious rebuke was a true kindness that exposed my prideful need for the kind of humility that cries out to God for help with critical judgement that polices growth in others. The fiine china I’ve been handed allowed me to see that God’s work in my heart over many years has resulted in a level of Christ-incarnating love that is tender and vulnerable and invites people to share hard secrets that require gentle compassion and careful listening. I, like you, am that mixture of both remaining sin and God-initiated growth.

Here are some questions that have helped me to invite the Spirit of God to probe my heart:

Do I resent needing others? Do I battle the desire to hide my flaws, sins, temptations and brokenness, or do I just give in by keeping secrets?

When is the last time I took the initiative to confess and/or admit to someone a recurrring temptation, struggle or sin pattern in my life?

What happens in my heart when I feel needed by someone? Am I puffed up by their respect or humbled by their vulnerability?

When others admit their neediness do I join them by admitting my own?  Or do I quietly withhold our sameness, perhaps to appear less weak?

Cory’s beaming face that Saturday in the gym was moving because this was the first -- and perhaps the last -- time teammates had hoisted him on their shoulders in the middle of an electrified gym.  His disability was mild enough to allow him to know he was “different”, which made the situation all the more precious. Like him, you and I are needy and hopefully we, too, know it. Sometimes God allows us to get into the game and be a part of something really wonderful as we watch the ball of being needed swish through the hoop of someone’s life. But what best makes that happen is remembering that neediness is the best foundation for being ready when someone needs us.