The Best Sovereign Grace Album Yet 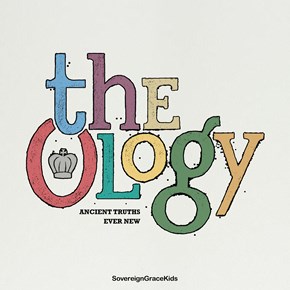 This is a review of Sovereign Grace’s new album The Ology and as you can tell from the title, you aren’t going to have to wait till the end for my recommendation. Buy it immediately. Oh, you don’t have kids? Buy it anyway and give it to someone you know who has kids, after you listen to it a few times. The Ology incorporates simple but memorable melodies, creative instrumentation over a wide range of styles during the course of the 11 songs. These factors serve to make it enjoyable to sing along with lyrics that do an incredible job taking deep truths and making them clear and compelling for kids.

The album starts with “The God of Wow” which, as you would probably imagine, is an upbeat celebration of some of the attributes of God. It hits on God’s eternal nature, his omnipresence, the trinity etc…in a celebratory way. This is Amelia’s (my 5 year old daughter) favorite song. The melody is catchy, the lyrics are easy to memorize, and the rock and roll is simple and fun. “The God of Wow” gets the album off to a fast start and it never loses its momentum.

“Just the Way God Wanted Us To Be” is a country song (pedal steel guitar!) that tells the story of creation and the fall, and uses that to then clearly articulate that God made some of us boys and some of us girls, all of us in his image, just the way he wanted us to be. Being clear that some of us are boys and some of us are girls and God intended us to be that way through how he created us is now a somewhat subversive message that we can assume will be challenged by our culture.  We can also assume that those challenges will target our kids at an increasingly younger age. Helping my kids maintain a biblical conviction that girls are girls and boys are boys isn’t something I ever thought about before I had kids. This song reminds us that God’s good creation is the basis of our convictions in this area and will serve to instill that simple but profound truth; I am grateful for it.

I could say similar things about all the songs, and how useful they are, but you get the idea and this is a review, not an essay so I’ll mention just a few more.

“The Scariest Song” is actually the funniest song. Bob Kauflin’s vocals are perfect as he describes how dentist drills and creepy clowns are not nearly as scary as sin. (As a side note, the second verse starts by asking what the scariest thing is to you followed by “some say living, some say dying” which is a clever line; be ready, however, to explain to your 5 year old why anyone would say living is scarier than dying. That was fun.) The music fits the goofy/scary mood and it’s just scary enough that Amelia gets a little nervous (and pretends not to) when the track comes on.

“God Always Keeps His Promises” is the song that was on when my wife turned to me and said “This is a kid’s album but…I needed to hear this.” “Totally God, Totally Man” is a 50’s-sounding song that teaches Christology to kids, explaining the nature of Jesus and also its significance. The chorus ends with ‘to save the world, fulfill God’s plan, he had to be totally God, totally man.’

“All About Jesus” is the last song on the album, and it rivals Disney in its memorable chorus and overall positive vibe. It’s like a song you would hear at the end of one of Disney Jr’s Tinkerbell movies (which I also highly recommend), except its lyrics are teaching kids the most important truth in the world. It’s a cool thing to hear my daughter belting out:

Shoutin’ out from every page, there’s one hero that will save the day

This album is designed for kids 5 to 11 years old, but its musical creativity, memorable melodies set to lyrics that simply present profound biblical truths make it the worship music equivalent of a Pixar movie. Great for kids, but plenty to keep the adults interested as well. Rating: 4 stars, two thumbs way, way up and all of the rest. You can purchase the album here.

PS – Sovereign Grace Music has put out awesome congregational songs for years and years. The best lyrics, quality production value and solid instrumentation. But I wouldn’t describe most of it as ‘fun.’ At least not since Bob Kauflin’s piano intro to Go Forth. This is obviously just one guy’s not important opinion…but it seems to me that congregational songs don’t always need to be serious business. Not that fluff is the idea of course and fluff in Sovereign Grace Music will happen when pigs fly, and rightfully so.  But sometimes loud clanging cymbals are called for, and joyful praise can be something other than how U2 or Mumford and Sons would play it. The Ology showed Sovereign Grace Music is more than capable at having some fun musically in a way that serves the lyrics and memorization. I wonder if that can infect the congregational albums as well, just a little.

Also, you could click on the part that says "You can purchase the album here."

You can buy the CD here: http://www.integritymusicdirect.com/music/sovereign-grace/the-ology-detail

Thanks for the great review, Joey!

Where's the link to buy the CD?!