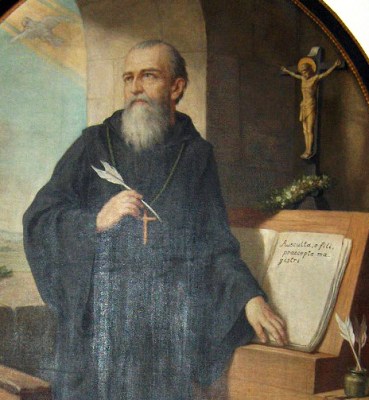 Eds. note: This continues a discussion between own Jake Phillips and Ryan McLaughlin (who worships at an Eastern Orthodox parish) about the oft-discussed Benedict Option.  You can read Part 1 here.  Ryan's words are in bold, while Jake's are in normal text.

Hah, well, a lot of Eastern Orthodox folk will tell you that the Pope was actually the first Protestant, but I digress...

I think your last point is well made, and I think there's a clear connection between that point and how I'm going to answer your question.

You said: "Second, I wonder if Protestant communities, and even especially Reformed communities, aren’t nearer to Dreher’s formulation of BenOp then Catholic communities in the first place." In many ways, I think the answer has to be a definitive "yes". I'm going to start by saying why I think that's the case, historically speaking, because I think it's going to go a long way towards answering your questions about the acceptance of Catholicism in the broader culture.

You noted that Catholic immigration into this country was met with very hostile resistance at first. Yet just 100 years after Irish potato famine refugees are first met with the Know Nothing party (Eds. note: when are we going to have a dicussion about Trump?) we're (allegedly) electing an Irish Catholic president. What happened in the mean time?

First, you have a very concerted effort by Catholics to fit in. And I don't just mean Italian and Polish immigrants learning the language and dressing differently... there's an institutional effort to adapt on a large scale. Take the Knights of Columbus, for instance, a huge fraternal organization that tens of thousands of Catholic men belong to. They modeled their organization off of the Free Masons, who were enormously popular in this country at the end of the 19th century. The 4th degree of the Knights of Columbus, i.e. the highest degree, is patriotism. Within a few decades, there's a KoC chapter in every Catholic parish in America, they're marching in holiday parades right alongside the Shriners across the country, they're sponsoring Little League teams and charity fundraisers, and...

...and before you know it, the average Catholic man in America isn't experiencing community in a way that's fundamentally different from the way that the average American man in general is (at least until the 70s or 80s, I guess, when Elk Lodges and Masonic temples get less popular). Both Catholics and Non-Catholics alike begin to view Catholicism as just one more flavor of Americanism. So there's a lot of your acceptance: Catholic Joe isn't all that discernibly different from Protestant Joe in how he lives life in community. On the other hand, a lot of Evangelical communities started off in mainstream Protestant apple pie and mom and dad type communities but reacted AGAINST that at some point during the 20th century. They're purposely moving away from the broader culture, while Catholicism is moving hard towards it. And, let's be honest, Evangelical folks are purposefully forming community (at least at first) around things like Bible studies, not sponsoring Little League teams and marching in the Christmas parade. Historically, I think that accounts for a large part of why I think there are some Evangelical communities that are closer to living out the BenOp than Catholics.

Second, there are huge shifts that take place as a result of the Second Vatican Council in the 1960s. For one, it's really the first time that the Roman Catholic Church officially views democracy and religious liberty in a positive light. This change gets a major assist from American theologians like John Courtney Murray, SJ, who helped author the major document that defined the Council's stance on this. I think this gives a huge boost to Catholic acceptance in America, because it reassures folks that the huge number of Catholics in this country aren't going to try to overthrow the government and install a Hapsburg monarch. For another thing, there's the shift away from using Latin in the liturgy, which makes Catholic services just seem that much less foreign to Americans. There are other liturgical changes that take place as well, and I think they've by and large been disastrous for the Catholic Church because they've destroyed a key element of Catholic pedagogy and spiritual formation... that's perhaps a topic for later, but suffice to say that in destroying a shared communal identity that's different from the surrounding culture, the liturgical changes helped preemptively strike against the formation of BenOp like communities in Catholicism, even as Catholicism gained broader cultural acceptance.

OK, so let me get around to my question...

You talked about being a gardener rather than a knight, and I think that's very well said. One of the underlying assumptions of the BenOp seems to be that law follows culture, and not vice versa, which I know you and I both believe. But what are the implications of that for Christian involvement with law and politics going forward? I'm guessing that since you and I both have JDs, neither of us is probably going to come to the conclusion that total disengagement is the answer. But doesn't there need to be a different understanding of the role of Christian faith in law and politics than previous generations have held? When can a committed gardener take up a sword and shield?

Fascinating. Your explanation of the Second Vatican Council makes sense, especially given the wide-ranging concerns that Jack Kennedy would have been subservient to the pope moreso then to the Constitution (in a 14th-century England fiefdom sort of way, I suppose. The concerns of the American electorate are nothing if not ironic).

You’re absolutely right, of course, both that “law follows culture” and that neither of use are going to advocate for total disengagement from culture. The question of “when can a committed gardener take up a sword and shield?” harkens back to your earlier question, I think, about the need for Reformed communities to become better-educated regarding church history. Church history is littered with both excellent and less-then-excellent examples of gardeners becoming knights; and, no worries, I’m not even talking about Martin Luther.

Pope John Paul II was, it seems, always a committed catholic, but an athlete, actor and worked in a quarry prior to World War II. George Whitfield was an innkeeper and somewhat ambivalent theology student prior to the Deistic tendencies of early America. Bonhoeffer; Augustine; Justin Martyr; Thomas Beckett, etc. etc. We have a full and rich history of men who were committed to Christ for a portion of their lives, but became historically memorable for things that they did later in the Christian lives. By “later,” of course, I don’t mean at the end of their lives. I simply mean the term in contradistinction to others who had some sort of (sometimes radical) conversion experience, and then immediately began the work for which they would eventually become known, i.e. Billy Graham or the Apostle Paul.

I think that model is probably the one from which we could better learn. And it seems, at least to me, that the question isn’t so much “when CAN we become knights” so much as “should we?” Because there will always be important reasons to radically fight for a Christian cause. Abortion, racism, sex slavery, genocide and many other issues are important enough to drop everything we are doing and fight against for the rest of our lives. But there are also plenty of examples from church history of those who became knights to disastrous ends. You might point out Luther as an example; I might favor Pope Innocent III; we would probably both agree on Falwell. In all three cases, though, the sincerity of the men probably can’t be questioned. They all thought (probably) that they were fighting worthy causes (Islamic genocide, church corruption, abortion/cultural depravity). We probably wouldn’t even quibble, conceptually, on the necessity of fighting those things, to the extent they exist.

All that to say, I’m not sure what the answer is. It’s probably an intellectually unsatisfactory answer that involves a lot of the Holy Spirit and a little of personal fortitude. I’d be interested in hearing your thoughts.

Before we get into the weeds of the pros and cons of BenOp, I want to add to the thousands of words we’ve spilled merely setting it up. I’ve often thought there’s something interesting about the discussions regarding BenOp taking place at a time when the Pope is preaching a message of inclusivity and a form of cultural engagement that, at least implicitly, seems not only outside the context of BenOp, but in some ways directly opposed to it. So I guess my question is this: what’s the deal with Pope Francis? More specifically, if his theology or methodology skirts the edges of orthodoxy (and I’m not sure that it does, but I know some who seem pretty sure), how do you foresee the church reacting over the next 5-10 years? Do you think some within Catholicism are attracted to BenOp exactly because they fear the direction not only that society is heading, but also the direction that Catholicism itself is heading?

Jake thought this was an excellent question.  You'll have to tune in next time to see Ryan's answer, and to (finally) read a little bit that's, you know, actually about the Benedict Option.