How Should a Christian Respond to the Immigration Crisis? Part 1 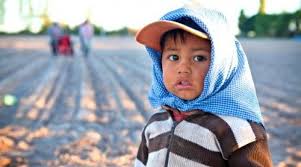 By all accounts, thousands and thousands of children are entering the United States from Mexico every month. What has been a political issue for a long time has become something of a crisis. It is at the point that the government is asking for help from churches in the areas most affected. (See here.)
This issue has a lot of facets, not the least of which is the political jousting that has been going on for years in regards to border security. People are currently talking about this issue more than ever. Today I have seen a post about a ‘resort’ being created for the children who make it to America safely, and how that is a problem. The Gospel Coalition published a piece by a pastor named Felix Cabrera in Oklahoma calling for support in serving 1200 children being kept at a military facility in Oklahoma City. It was roundly criticized in the comments section for not focusing on the fact that the children shouldn’t be here in the first place. It has been a little bit alarming to see the lack of compassion from Christians towards these children, and really, illegal immigrants in general.

As Christians, we have pretty clear teaching on how we are to respond to those in distress.
"Then the King will say to those on his right, ‘Come, you who are blessed by my Father, inherit the kingdom prepared for you from the foundation of the world. For I was hungry and you gave me food, I was thirsty and you gave me drink, I was a stranger and you welcomed me, I was naked and you clothed me, I was sick and you visited me, I was in prison and you came to me.’ Then the righteous will answer him, saying, ‘Lord, when did we see you hungry and feed you, or thirsty and give you drink? And when did we see you a stranger and welcome you, or naked and clothe you? And when did we see you sick or in prison and visit you?’ And the King will answer them, ‘Truly, I say to you, as you did it to one of the least of these my brothers, you did it to me.’" Matthew 25:34-40

If you don’t think the children making the trek from South America through Mexico and into the United States are the ‘least of these’ I would encourage you to read accounts from the folks who are working with them directly. The most interesting thing that Jesus said in that Matthew 25 passage is the part where he said “except if ‘the least of these’ did something illegal, then just treat the issue as a political issue, and don’t help them because it will set a horrible precedent and other kids families might think its ok for them to do illegal things too…like risking their lives to get to America.” Just kidding, Jesus never said that.

Obviously I recognize that there are real political issues that need to be considered in the way that the United States government responds to this crisis. However, what I am asking today is not how the United States should respond, but how citizens of the Kingdom of God should respond. We should respond with compassion, and by encouraging others to respond with compassion. We should respond by encouraging our government to treat these immigrants with compassion, no matter what is determined about their long term ability to stay within our borders. The overwhelming majority of the children flooding into our nation are doing so because they are leaving or being sent from dire situations in search of hope. Their hope is mostly misplaced, since the United States cannot offer the peace and security they are looking for, fundamentally. What they need is our hope. Instead of worrying about precedent, fences, and that sort of thing…let’s encourage pastors like Felix Cabrera in their effort to reach as many of these kids as possible with the hope they didn’t even know they had.