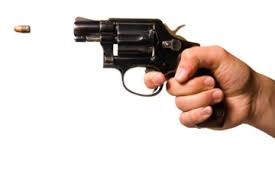 Eds note: Dr. John Piper recently wrote about guns and self-defense in a response to a speech by Jerry Falwell, Jr.  Many people within the evangelical blogosphere responded in disagreement.  Joey Phillips has written some thoughts both about Dr. Piper's original post and on the reaction.  We are publishing it in two parts.  Here is the first part; the second part will be posted tomorrow.

Exegesis of “turn the other cheek” that results no one ever having to actually turn any cheeks ought to be suspect exegesis. – Douglas Wilson

John Piper set off a mini-firestorm in the conservative evangelical world when he responded to Jerry Falwell’s speech at Liberty University, during which Falwell encouraged the students to get gun permits and to be prepared to “teach them a lesson if they ever show up here.”  Falwell made the comments about "Muslims" but I will charitably assume he meant terrorists.  Either way, Piper disagrees that this should be the Christian’s mentality regarding guns and self-defense.

The ensuing discussions and responses to Piper have been interesting to me. Some denied that what Piper is addressing is even a real issue. In other words, the argument is something along the lines that American Christians don’t need a lecture on guns because we are very sober about our weapons and serious about loving our enemies (of course!) and while Falwell’s remarks may have been a little over the top, it's not really a big deal.  Well, if the leader of America’s most influential Christian college talking about teaching Muslims (er...terrorists!) a message isn’t sufficient to make the topic worth addressing, then here are a couple more.

Those quotes from two of our most noteworthy evangelical politicians (whose base of support, for what it's worth, are predominantly conservative evangelical Christians) are typical; they are not the exception.  Both quotes reveal an attitude where taking a life in self-defense is not a sober and even sad last resort, but is instead almost a source of pride.  Now, you may agree that taking a life in self-defense (while saving money on ammo) should indeed be a source of pride; whether you do or not is somewhat beside the point, at least for the moment.  But I hope, at least, that we can dismiss the argument that Falwell's position is unique in modern American evangelicalism.

In any case, whether he's right or not, I think the fact that Piper is challenging American Christians to think on the topic biblically is a good thing. Piper touched a nerve, and if that causes us to think more deeply about the difference between what is lawful and what is righteous, then praise God. I want to do three things in this two-part article. First, I want to briefly make sure we are all on the same page about what is actually being argued by Piper, since some (even most) of the articles and responses have been arguing against straw-men and against secondary points that Piper made which, to be fair, did weaken his article. Second, I want to place Piper’s argument within the context of historic Christian thought on lethal self-defense.  And third, I will argue that his response to Falwell, while not perfect, was necessary and good.

Given that my intro has been fairly long, today I will focus on what Piper did not say (the first thing I wanted to do, i.e. make sure we are all on the same page).  Tomorrow, I will focus on situating Piper's argument within historic Christian thought about lethal-self defense and on why Piper's response was good.

What Piper Did Not Say
• Despite the title of this widely distributed response to Piper, he never denies anyone’s right to bear arms. In fact, he never talks about the 2nd Amendment at all, or anyone’s lawful rights. The fact that a preacher can make a pastoral case for not encouraging Christians to arm themselves for the purpose of teaching their enemies a lesson, and receive a response from Christians that can be basically summed up as ‘You are denying my second amendment rights!’ is a poignant (if hilariously ironic) illustration of Piper’s concern.

• Piper did not say that if your wife is in the process of being killed in front of you, then you should do nothing except stand there and pray for the soul of the killer. What he did say was the Bible avoids that sort of silly ethical reductionism, and since there are a million different ways that type of scenario could occur, he has no idea how he would respond, and he would be very slow to judge you if you made a decision he isn’t sure he would have made. I think Piper is unnecessarily vague here, since there are Christian ethical principles we can apply to these types of situation, but it does no good to pretend he is saying something that he isn't.

• Piper was not advocating for pacifism. He is advocating for governments to use the sword as God ordained, and Christians to radically love as God ordained.  The very fact that so many Christians are claiming that Piper is advocating for pacifism shows that they are either poorly interpreting or willfully misunderstanding his point.  If you have to misconstrue what Piper is saying in order to argue against him, you are probably unintentionally showing the strength of his argument.

Hopefully that clears up some of the straw-men that some within the evangelical blogosphere have created.  Tomorrow, I'll get to what Piper actually said, the pros and cons of his argument, and how it compares to historical Christian thought on the subject.