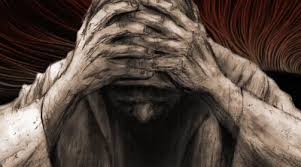 (Eds. note: Janelle writes a thoughtful post about music, how it can influence us, and the importance of discernment.  Every once in a while, we add this reminder: the opinions and biblical interpretation on this blog is the perspective of the individual writer, and not necessarily (and not usually) the opinion of every person in the church.  Our goal with the blog is to challenge, edify, and encourage you as "iron sharpens iron." We hope you read it in that spirit).

My second home with my husband was a two-bedroom apartment in south Orlando. We were there for two years, and over the course of that time, we had developed some relationships with our neighbors, particularly a man named “Joe” (not his real name.) We would greet him whenever we saw him, and he would respond with a big smile and a wave. We would comment about the weather, or other “fluff” conversation, to see if it led anywhere. Our mission and purpose was clear…we wanted to influence our neighbors with the gospel, and would search for open doors.

The door opened with Joe. The longer we were living there, the more we interacted with him. He would often smoke outside his apartment and we would take the opportunity to engage him in conversation. Eventually we invited him to church, and it became clear that he knew we were Christians and yet remained open to continuing to dialogue with us. Eric eventually asked him to meet with him over coffee and talk about Jesus. He gladly agreed. When they met, Eric heard some of his story. He was a former felon, had spent time in and out of jail for drug related charges. He would deal drugs on and off (and swore he currently wasn’t) yet his Mom had raised him right. They attended church as he was growing up, and he had wandered away from his faith when he entered his teenage years. He asked for prayer for himself, and for his girlfriend, also a former felon, who was currently in rehab.

Eric and I discussed what we could do for them, and how to best serve them. We talked to Joe about coming over for dinner, along with his girlfriend, where we would pray for them. He again gladly accepted, and picked her up from rehab to come have a meal with us. “Jane” was also friendly and outgoing. As soon as we sat down to eat, we couldn’t get them to stop talking. They opened up about their past, and their present struggles with drugs and alcohol and clubbing. They opened up about their upbringing, both from single-mom households, both dragged to church when they were kids, both getting lured away by friends who introduced them to what they called a “gangster” style of life. Jane told us about her daughter who was being raised by her grandmother, because Jane couldn’t keep herself out of trouble. They talked about how they both knew that they needed to get out of this lifestyle, and their inability to be able to make the right choices to do so, especially since it was so hard for them to get a job, let alone keep one.  (Eds. note: Our criminal justice system and how it perpetuates crime is a blog post for another day).

We were able to share the glorious gospel with them, about how we understood their inability to choose any other way of life. We told them about Jesus, who could help them, about the Holy Spirit, who could empower them. It was an incredible night. It was obvious that they both really wanted to hear it; they soaked it up. Jane cried, and asked for prayer. Joe would say things like, “I know I need help. I know I need to change. I just can’t.”

What is my point? I’m setting this up for a particular reason. I asked them this question:

“Can you point to one particular thing that led you to this type of life? What was the entry gate?”

“Music,” Jane said without any hesitation.

That was the last thing I expected to hear. There we were, with our apartment complex’s drug dealer and his girlfriend in our home, listening to their sad story of a life wasted to drugs and gangs, and they unequivocally blamed music as the entry into it all.

Jane went on to explain how as a young girl, hearing lyrics of the glories of a certain lifestyle, the wealth and prestige, influenced her to want that type of life.

“It was subtle at first. But as my girls and I listened, it no longer became something we wanted. It became what we were living. And it’s not all it was cracked up to be. It ruined my life. It led to doing drugs. It led to shoplifting and stealing, because we wanted to support the type of life we heard about, but never could afford. I’m in rehab because now I can’t get away from it, and it’s controlling me.”

I’m not making this up. I know you’re sitting there reading this, thinking, “No way. No one actually blames music for how they messed up their life. That’s just silly.”

Yet I’m here to tell you that that is exactly what they said. And it shocked me, too. You can make the argument that lyrics don’t affect you; that you just listen to the music. That not all hip-hop is bad, because seriously, Lecrae is a hip-hip artist isn’t he?

Look, I’m not here to bash hip-hop; of course not all hip-hop is bad, and every style, including some Christian music, has its vices. What I am saying is that you can’t make the claim that you are unaffected by what you hear. That’s just not a biblical concept. The only way we can understand anything spoken to us is because we hear it and interpret it. “Faith comes through hearing, and hearing through the word of Christ.” (Romans 10:17)

James speaks often about the power of words, specifically about the power of the tongue (James 3). The only category for music in the Scriptures is that of singing praise and giving glory to God, so much so that even if we as Christians are silent, the rocks and trees would praise him (Luke 19:40).

I think there is a definite use for non-Christian music. You can sing about the love you have for you significant other, and it can be glorifying to God. You can sing about righting social wrongs and it be glorifying to God. You can sing about the sacrifices of our military, or the pain and suffering after 9/11, or the pain and sadness after a break-up, and it be glorifying to God. What matters is how we interpret these things. Through what filter are you listening? The filter of a secular worldview that finds ourselves as the arbiter of truth? Or the filter of a biblical worldview that sees God as the giver of all things good, the One who is behind the love you have for your spouse, the one who ultimately will makes all things right, the one who is with you when you are broken? All things are empty without Him, and that emptiness is on full display when what we listen to is devoid of Him.

So let me challenge you, next time you turn on Keith Urban, or Elvis, or Macklemore…listen with ears that can filter out the truth from the lies. Do what Joe and Jane couldn’t do. Listen and point to the One who gives the good gift of music. And if what you are listening to is in direct rebellion to the character of the God we worship, for crying out loud…turn it off.