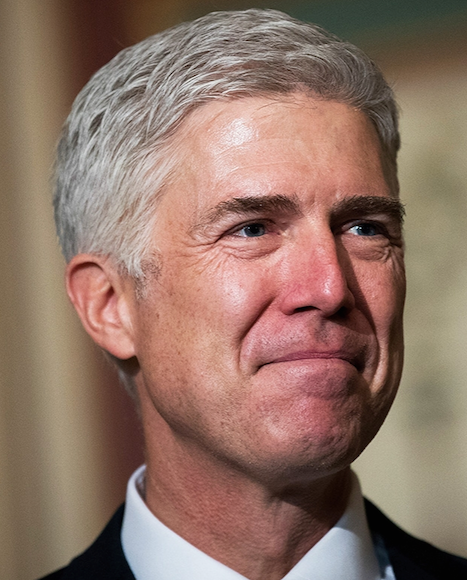 This week, among many other (to be charitable) less than ideal developments for President Trump and Republicans more generally, there has been something to cheer conservative spirits. Judge Garland, currently an appellate judge on the 10th circuit, has been answering questions before the Senate in his confirmation hearing. He’s been eloquent, persuasive, and, at times, even brilliant. I have been more than critical of Trump, and couldn’t in good conscience vote for him, but many Christians voted for Trump for this sole reason: so that a textualist would be nominated to the Court. The hope was that Trump’s pick for the Supreme Court -- Gorsuch -- would be the type of judge that Christians have long sought. Gorsuch’s performance, to that end, has been heartening.

As an attorney and constitutional law nerd, this has been completely unsurprising. Gorsuch’s opinions on the 10th circuit were clear, concise, occasionally brilliant, and almost always the result of an attempt to interpret the law as written, and not as he wishes it to mean.

But there was one of Gorsuch’s answer that has concerned some pro-life Christians, which was when Gorsuch answered a question about Roe v. Wade.  And this answer was especially concerning, given that many pro-lifers only cared about the confirmation hearings for one reason, and it was...Gorsuch...this very answer.  (Thank you, thank you, I'll be here all week.)

Before we look at the question and answer at issue, though, it’s important to give some background on Roe. In 1973, the Supreme Court found a constitutional right to an abortion. The Supreme Court found the right in the 14th Amendment’s guarantee that no one’s liberty can be taken away without due process of law. If this seems counterintuitive to you, well, I can’t say I blame you. To be incredibly reductive, the Supreme Court, after the 14th Amendment was passed in the post-Civil War era, found that there was contained therein an implied right to privacy, and then eventually found that this implied right to privacy itself implied a right to an abortion, although, they admitted, such a right was not absolute. This was a classic example of a judicial philosophy that evangelical Christians often claim to be against. Rather than interpreting the law according to what it meant when passed, the Supreme Court imposed another meaning entirely onto the text of the law.

Nevertheless, Roe v. Wade was subsequently and explicitly confirmed by the Supreme Court, by my count, eleven times, most notably in Casey v. Planned Parenthood, which changed the standard by which laws restricting abortion would be held, but otherwise affirming Roe’s holding.

So What About Gorsuch’s Answer?

At confirmation hearings, potential Supreme Court Justice’s say, quite frankly, as little as possible. This is a reality for several reasons; first, there’s no downside to being as careful with answers as possible, and there’s a lot of downside to being totally honest. If a Supreme Court Justice said “I will overturn Roe v. Wade as soon as possible,” it would likely end his nomination, as would an answer of “I don’t believe the Second Amendment grants a private right to bear arms, and I would overturn Heller as soon as possible.” Plus, there’s ethical considerations; not only do justice’s not want to tip their hands to potential litigants as to how they might rule in a potential case, but many of these individuals -- like Gorsuch -- are currently sitting judges who might have a similar case on their docket, or potentially so.

The question and answer that has concerned some pro-lifers came when Senator Dick Durbin asked if Gorsuch accepts, essentially, the holding of Roe. Gorsuch replied, “That’s the law of the land.” He also said that Roe is “precedent,” and that President Trump didn’t ask him if he would overturn Roe v. Wade, but had he done so, Gorsuch “would have walked out of the room.” Combine those answers with the fact that Gorsuch has never heard a case on the 10th Circuit concerning the subject of abortion, and has never written about it, and some pro-life evangelicals have expressed concern.

So, should they be concerned?

I don’t think so. First, it is important to consider the points I made above. Any pro-lifer who expected Gorsuch to say something to the effect that he will overturn Roe v. Wade -- or that he doesn’t think it’s relevant precedent --was deluding themselves. In this context, it was simply never going to happen. Second, Gorsuch was merely using descriptive language. Acknowledging that Roe v. Wade is the law of the land says nothing about whether you think it should be the law of the land, or that the Supreme Court has interpreted the 14th Amendment correctly in finding a right to abortion. Rather, it is simply acknowledging fact. In other words, it’s no different than me saying “Donald Trump is the president of the United States.” It doesn’t mean that I like it, or think he should be; I’m just acknowledging something that’s inarguably true. And finally, like it or not, but it is relevant that the Supreme Court has reaffirmed a holding, any holding, eleven times. Precedent isn’t binding, but it is persuasive, and the more often it’s affirmed, arguably, the more persuasive it is. Christians claim they don’t want judges who simply insert their own personal beliefs into the law; if that’s true, then we should absolutely want judges who take seriously the precedent before them.

Here’s a joke that I didn’t come up with, although I’m not sure who did. The scene is a senator asking a Supreme Court nominee questions.

The point is that it’s a lose-lose situation. Gorsuch gave the only viable answer, which was to simply describe the law as it currently exists, and state that precedent is important to any Supreme Court justice. I don’t think Christians should be concerned about Gorsuch. Evangelicalism might have sold their birthright for a bowl of stew, but I don’t think there’s any doubt that the stew is quite delicious.

How Would a Textualist Respond to a Case About Abortion?

If that’s true, then, how should Christians expect Gorsuch to rule on a case involving abortion? I want to answer this question because I think it’s important for pro-life evangelicals to have realistic expectations. First, for a variety of technical reasons, it is difficult for a litigant to establish standing and justiciability necessary to even hear a case about abortion.  After all, whose rights are being asserted? Probably not the baby's, sadly, because he or she has almost certainly already been aborted by the time it gets to SCOTUS.  A consistent textualist, like Gorsuch, would likely find a great many cases shouldn’t be tried at all. Conservative, constitutional attorneys wrestle with this issue all the time.

But assuming that’s not an issue, how might a textualist -- like Gorsuch -- rule on the issue substantively? First, I do think it’s likely Gorsuch would find that Roe v. Wade was wrongfully decided. Textualism looks to how a law was understood at the time it was written. (Sidebar: many people think textualism or originalism looks to what the writers of the law meant when they wrote it; this perspective is mostly incorrect). As I said above, there’s not much of an argument that the 14th Amendment was understood as proscribing abortion rights.

Why is this important? Because it means that the Supreme Court is not going to make abortion illegal. As pro-life activist, we must continue to do the hard work of highlighting science, being compassionate, convincing our neighbors, and advocating for both protecting the unborn and the provision of substantive assistance to parents. At best (and this is still a stretch), we can only hope that the Supreme Court rules that states can prohibit abortion, but not that they must prohibit abortion. But even if they do, that only means that we need lawmakers who will pass legal protection for the unborn, which means we need people who will vote for such lawmakers, which means we still have a lot of convincing to do, which means the fight for social justice must continue unabated.

So What Is the Alt-Right?

And Soon the Light Shall Come

How Can Systemic Racism Be a Problem When So Many African-Americans Are Successful?