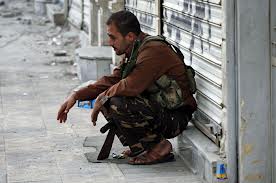 I forget things all the time. Just ask my husband. He has formed a habit of following behind me whenever we leave somewhere, whether it’s a restaurant or a friend’s house, to grab my phone, keys, and wallet that I left behind. My forgetfulness is my dad’s fault (right, Mom?), or so I claim. I tend to forget other things, too. I tend to look at what is going on around me in the world and see all the pain, suffering, death, and mourning and forget that God is in charge of it all. If forget that He is reigning still, in the midst of suffering. Forgetting my phone is one thing. Forgetting the sovereignty of God is another thing entirely.

I have a friend, Jared, in Gaza right now photo-documenting the ever-increasing hostility and violence going on there right now (check out his work here). In the midst of the pain and suffering, he manages to find amazing glimpses of hope and humanity while shells are falling around him and the people who live there. I think of them as “gospel glimpses,” and they remind me of God’s hand in control, even in the midst of brutality and human sin.

If you have ever studied even a little bit of Old Testament history, you know that Abraham was the father of the nation of Israel. God promised that through Abraham he would make a great nation, which would be a blessing. God said, “I will bless those who bless you, and him who dishonors you, I will curse, and in you all the families of the earth shall be blessed.” Such an amazing promise to give! God was basically saying that every single human being on the earth would be blessed through this one man. God’s plan was to bring this about through Isaac, but Abraham grew impatient and fathered another son through his wife’s servant, Hagar. Ishmael was born, not through the promise, but, according to Paul in Galatians 4, “the son of the slave was born according to the flesh.” And through Ishmael emerged the Arab people, who now follow Islam and the false god, Allah. Both the children of Isaac and the children of Ishmael make claims to the Promised Land, and the city of Jerusalem as their home. Both claim Abraham as their father. And both are right in doing so.

Ever since Ishmael gave birth to a nation, the conflict has grown and escalated to massive proportions so that we now have the non-stop fight over Jerusalem between Palestinians and Israelites. And the question that is always asked is this: can there ever be peace? True, lasting peace? What is the answer to the all the fighting and violence? Whose claim to Jerusalem is the true claim?

The only thing I know with 100% certainty is this: the gospel is always the answer. Just like my friend finds these glimpses in the midst of the horror, there will always be a way out for both. Both sides have rejected Jesus. So both sides will not know peace.

You might be saying, “This is way to simple, Janelle.” And I would say that sometimes the best answer is the simplest one. Just like when I forget my keys, the simple fix for this is to not forget them. Easier said than done! But the simple answer for true peace is the gospel, and it always has been, and it always will be. Although there are dual claims to Jerusalem, there is only one claim that really matters, and it’s not Israel’s or Palestine’s. It’s a claim made by a King, a true King who came once and will come again to claim his city and his people for himself. Once, he came as a humble servant to be brutalized and mistreated, to be murdered and broken for the sins of the world. When he comes again, it won’t be as it was before, being born as a tiny baby and sheltered in a barn.

This has significance for both Palestine and Israel, although not the in the way they think it does. Israel thinks that the coming of Christ will be for the first time, to set them up once and for all as the true people of God. Palestine thinks he already came as a good man and prophet, but certainly not as the Way, the Truth, and the Life. Both are wrong, yet Paul has a good deal to say about this in Romans 11 to Israel AND Palestine. He makes the claim that Israel was hardened and therefore grafted out of God’s promise because they rejected Jesus. Consequently, God grafted in the Gentiles (all non-Jews, including Muslims!). But Paul goes on to say that the Jews’ disobedience will not be forever:

“For the gifts and the calling of God are irrevocable. For just as you [Gentiles] were at one time disobedient to God but now have received mercy because of their [Israel’s] disobedience, so they too have now been disobedient in order that by the mercy shown to you [Gentiles] they also may now receive mercy [Jews]. 32 For God has consigned all to disobedience, that he may have mercy on all.” Romans 11:29-32

God promised that Abraham would be a blessing to the whole earth, and now Paul is saying the Jews’ disobedient rejection of Christ both brought about the inclusion of the Gentiles into the gospel and will eventually bring God’s merciful blessing back on them.

And here we see the mind-boggling truth that this was God’s plan all along, to maintain his promise to Abraham to bless all the families of the earth through him. Here we see the amazing, beautiful truth that God’s sovereignty extends even over blatant disobedience and rejection of His will and promises. For both Jew and Gentile. For both Israelite and Palestinian. For us.

Can there ever be true peace? Yes. True peace for Israel has already come in part through Christ and will come again in full when he returns to lay claim to his people, establish a New Jerusalem, and rule in this new city. As it is written:

“Then I saw a new heaven and a new earth, for the first heaven and the first earth had passed away, and the sea was no more. And I saw the holy city, the new Jerusalem, coming down out of heaven from God, prepared as a bride adorned for her husband. And I heard a loud voice from the throne saying, “Behold, the dwelling place of God is with man. He will dwell with them, and they will be his people, and God himself will be with them as their God.” Revelation 21:1-3