What This Grandmother is Learning from ANW 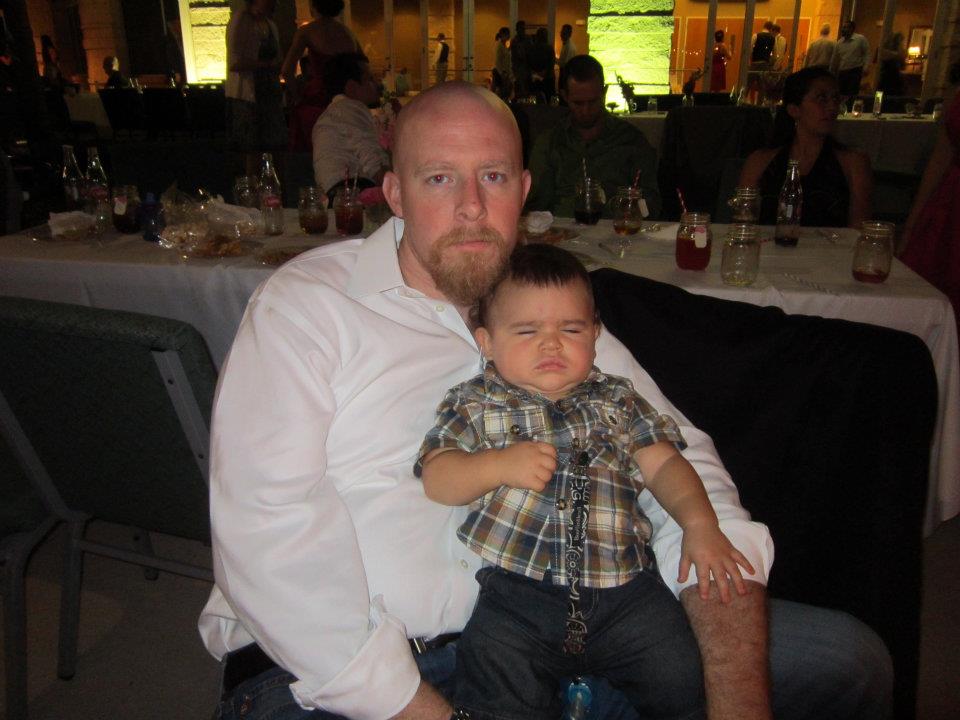 My son Josh has gotten involved in Ninja training. He’s gone from having major back issues and added weight that caused him to put aside the athletic life he loved, to flipping around obstacles in monkey-like ways and being the fav of my grandchildren when he uses them as human volleyballs in the pool.

I’ve always loved supporting my kids in their endeavors, and when Josh decided to begin a new healthier lifestyle I was happy for him. So when he set out to become a Ninja what else was a mom of seven to do but get on board yet again with another new venture? Honestly, I didn’t expect to get so into this world of people running up walls thrusting themselves up salmon ladders (where are they called that anyway?) and doing things with their bodies that human beings just shouldn’t be able to do. I think I expected to find a group of self-centered show-offs who loved flaunting their bodies and their skills. And while I’m sure those types are out there I’ve discovered something that has surprised and inspired me.

It happens on television when Ninja’s are competing.

It happened in Shaun Murray's back yard when he decided to invite my son over to train on his Ninja obstacles because he cared about a new guy who wanted to get fit.  Yes, a professional wakeboarder and Ninja veteran took an interest in an IT guy who dreamed of becoming fit and getting the warped wall he built.  Then he invited me on a ride where I grabbed this shot of him wowing a group of local friends on July 4th. 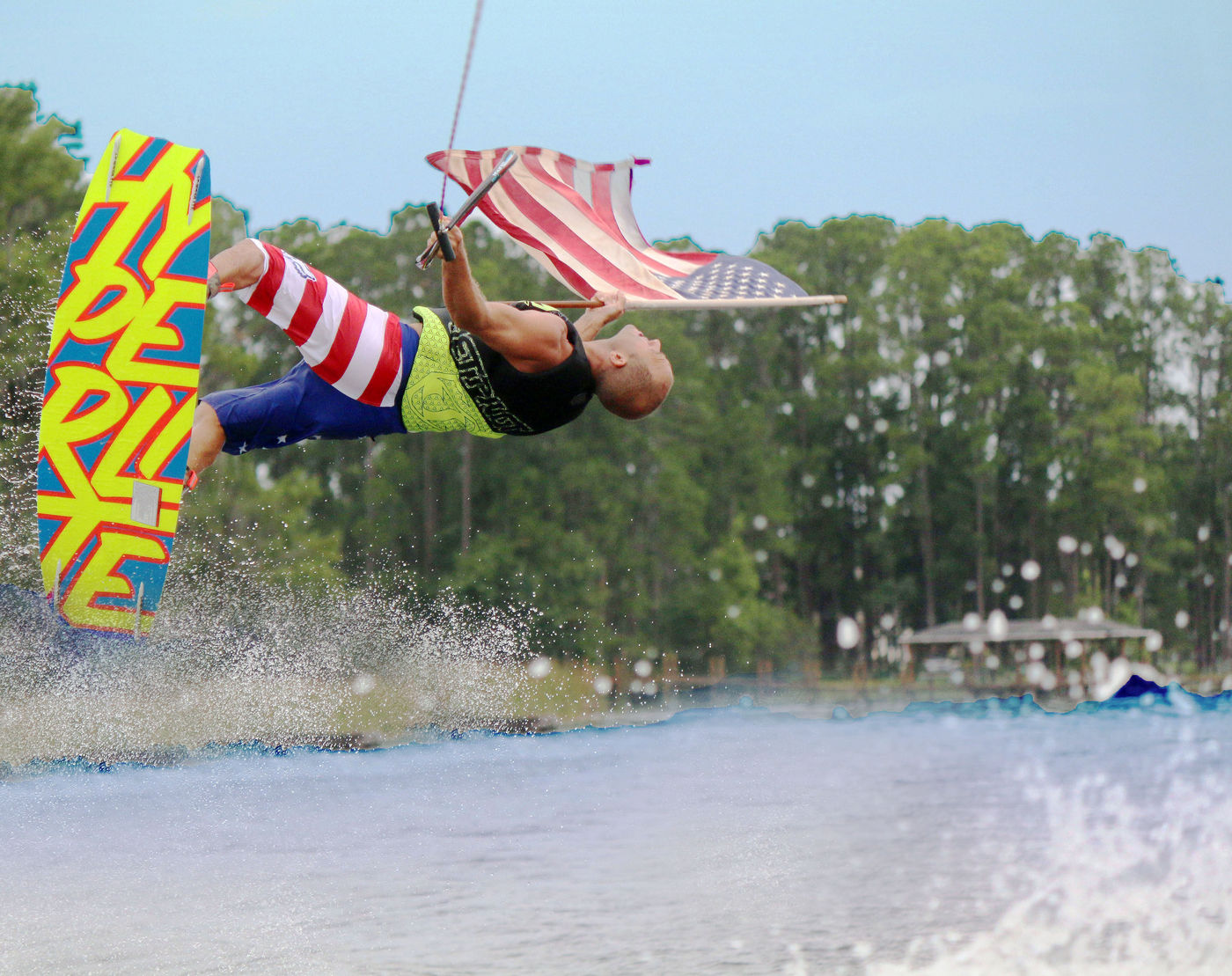 Ninjas are competitive. You don’t gain the mental and physical strength to do what they do without cultivating an
inner drive that pushes you to the limit…and likely results in priding yourself that you look good in the process. (Yes, my son has gotten his share of mockery for how often he’s seen on Facebook either shirtless or in a white t-shirt.) But one thing that shines brightly among Ninjas is their encouragement, even of competitors. The Ninja community knows how to “rejoice with those who rejoice and weep with those who weep.” They also understand that the war is against mental and physical obstacles, not against their comrades.

When Michael Sranger steps onto the course we’re all waiting for the camera to turn to his terminally ill wife, Enedina, and their two young children. Why? Because he started training to be able to lift and carry her when disease confined her to a wheelchair. A 60-year-old overweight grandmother is on the edge of my seat with the rest of the world as he leaps seven feet from one 3-inch ledge to another because the obstacles he’s facing physically and emotionally every day at home are symbolically before my very eyes. The other Ninjas aren’t hoping he’ll fail on the course because they’re cheering for a guy whose strength of character is far more worthy of applause than his muscles. They want him to GET IT on Monday night so he’ll be able to find the strength to get it on Tuesday morning and Thursday night and Saturday afternoon at home. 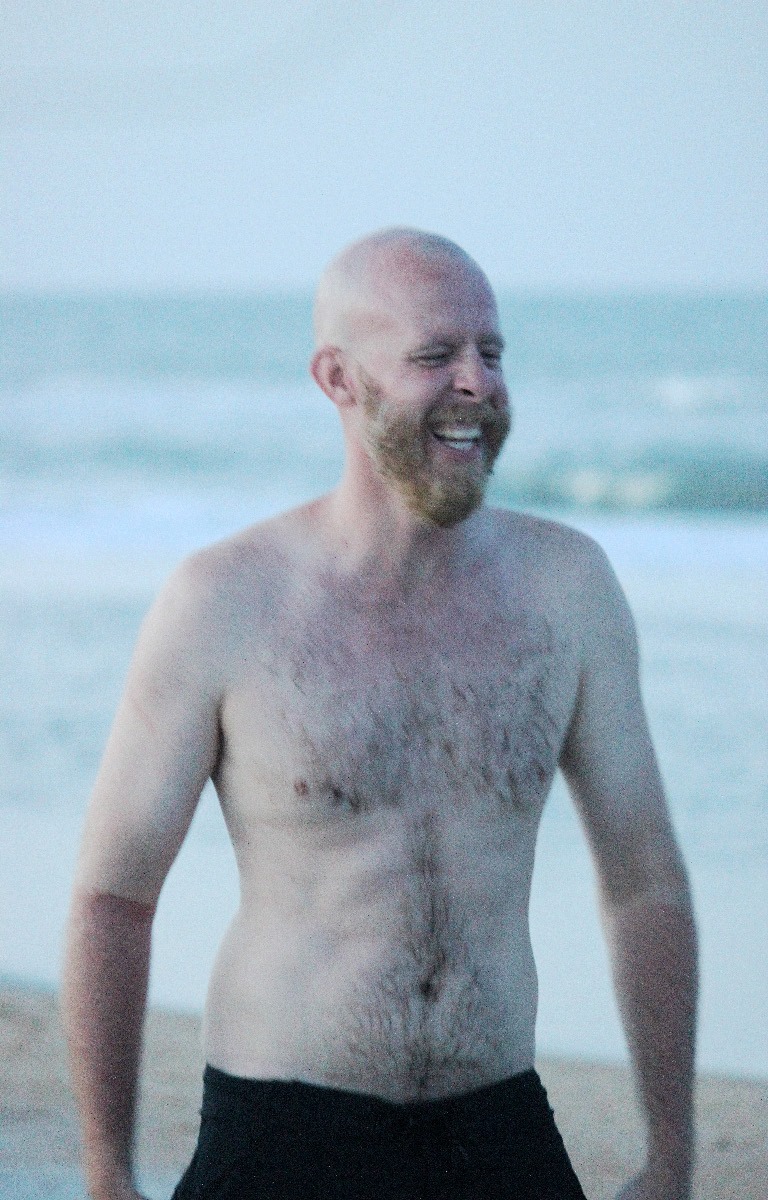 Watching this commitment to support and encourage one another has convicted and inspired me. I will never be a Ninja but I’m a wife, mother, writer, photographer, grandmother, aging woman, church member…and a Christian making my way through the brokenness in myself and others.

* Do I encourage those of whom I feel competitive or jealous? Wish I was as good at fill-in-the-blank as they are and unwilling to set aside my wish to cheer them on?

* Do I enter into the joys and successes of other mom’s children, especially when my child isn’t excelling at whatever is important to me?

* Am I quick to rejoice when a friend’s husband serves or loves her in a meaningful way that would be special to me as a wife?

* Am I hesitant to “like” a Facebook photo that is far better than any shot I’ve ever taken?

* And when a see someone fall, after working so hard to keep going through whatever obstacles they’re facing, does my heart ache for their failure or disappointment?

I’ve pondered why the Ninja community seems to have developed an inspiring (yet imperfect, I’m sure) 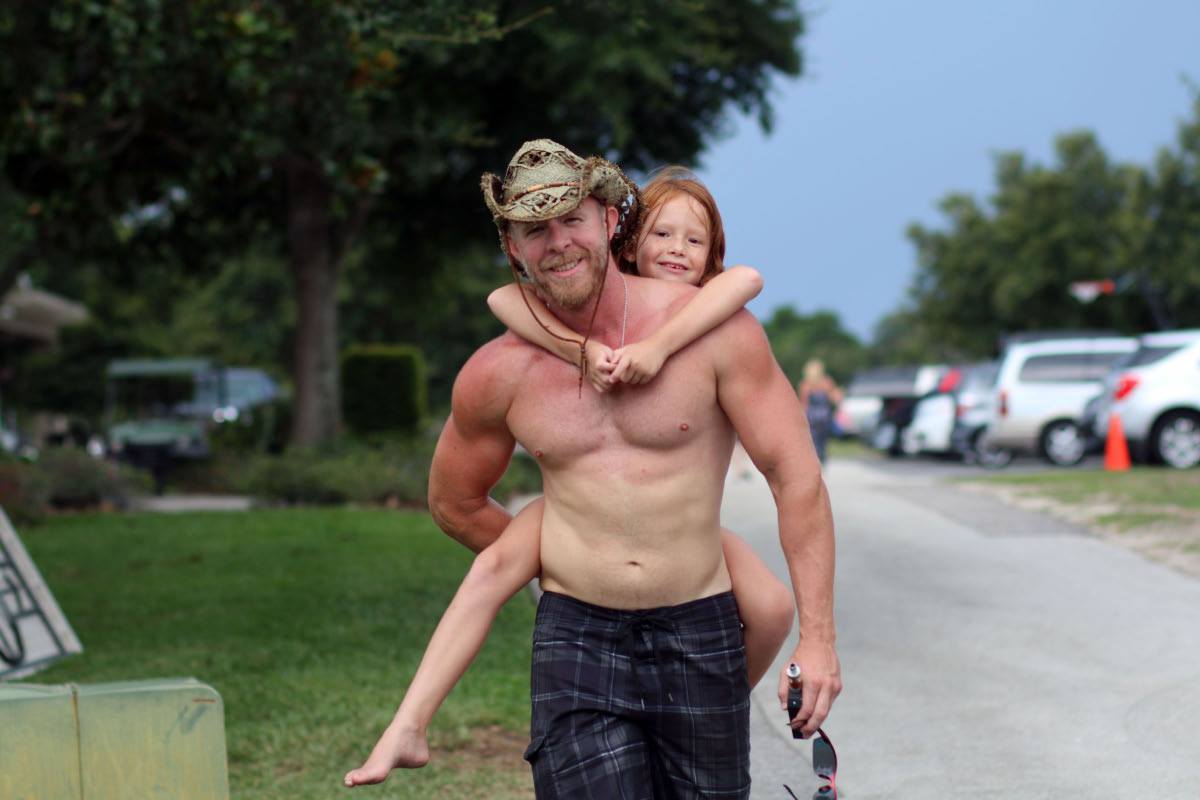 culture of encouragement in their short years? I wonder if it has something to do first with finding people that love what they love and are willing to sacrifice to improve? And second, I wonder if there's an unspoken awareness that what happens on the course somehow reflects things that are going on in their hearts and lives.  How many Ninjas have turned to ANW to overcome grief, brokenness, disease, addiction, depression or betrayal?

Isn’t that the way Christians should approach life together? We’re all facing dicey and taxing obstacles to get where we’re going. We are striving for a prize; training; sacrificing; longing to hit the buzzer on That Day and hear "Well done, good and faithful servant!" But we slip and fall along the way. We misjudge our steps and miss the mark and end up face first when the splash of disappointment tempts us to feel like a failure. And sometimes we actually make it. Our marriage endures the betrayal. Our kids show signs of genuine spiritual hunger. The raise or new job comes through. The wedding we thought would never happen comes. The disease is healed.

Or God gives incredible, breath-taking grace to endure when the marriage doesn’t improve or the kids remain spiritual dead or the chronic illness prevails or the spouse never comes. But grace and strength are there to keep moving.

I want to be a Ninja Christian. One who pushes through jealousy to rejoice with those who are better at stuff than me. Rejoices with the person who makes it farther than I ever have. Plants my face in my palms when they fall. Shares tears of utter joy when I watch those I wish I was like overcome obstacles they never imagined possible. And sacrifices to push myself harder and longer because I’m a part of a group of people who won’t give up and others in heaven and on earth are cheering me on to “get it!” and keeping getting it until I hit that buzzer on this earth or in the next life. 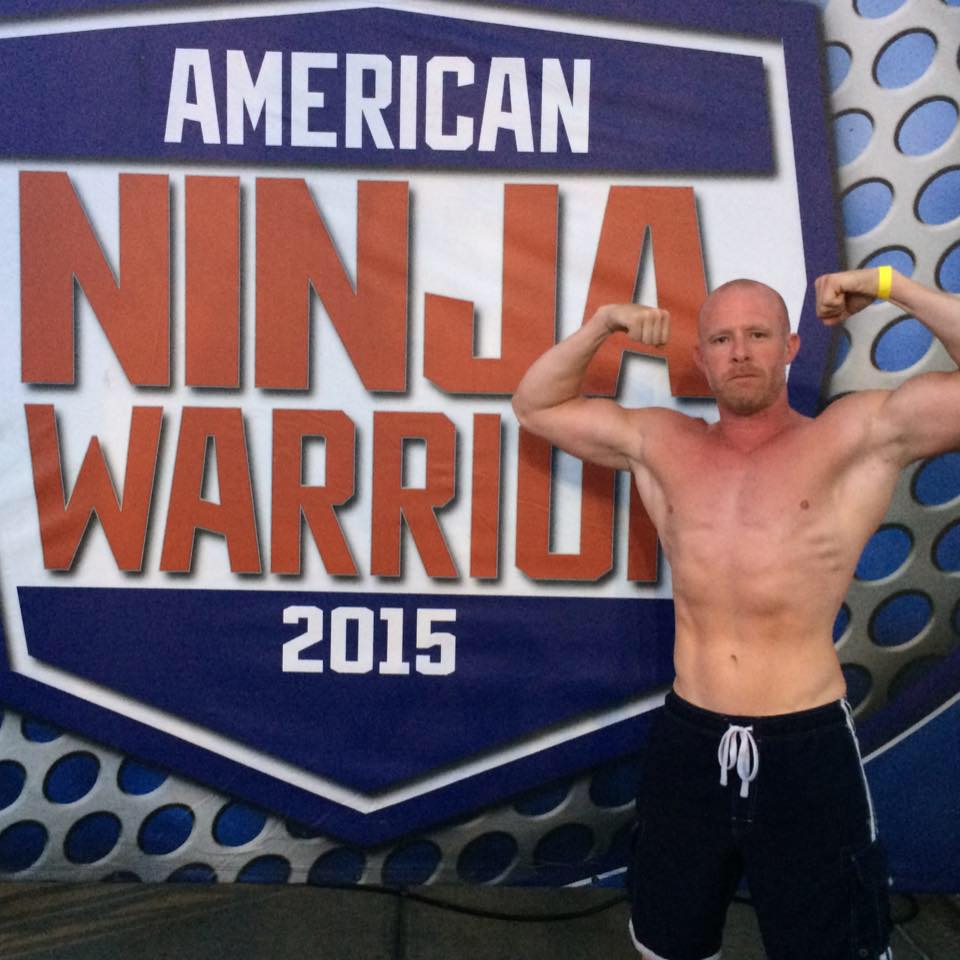 Josh didn't get the call this year, but he got to test the course here in Orlando where we live. The 2015 Ninja finals are approaching and I’ll be watching along with millions of others. It reminds me of some verses that have been important to me for years, and that I’m asking God to freshly instill in my heart for whatever years remain for me on this earth to keep training.

“Therefore, since we are surrounded by such a great cloud of witnesses, let us throw off everything that hinders and the sin that so easily entangles. And let us run with endurance the race marked out for us, fixing our eyes on Jesus, the author and perfecter of our faith." Romans 12: 1-2

Thanks for your encouragement, Paul. It's great to hear from you! Thanks for visiting!

Wonderful article Sheree. I practice at being a ninja, but like you, I also want to be a ninja Christian. What a great insight. Thanks for sharing

It's called a Salmon Ladder because you move "up" the ladder like a salmon swims "upstream".

Thanks for writing such an encouraging article. So many people have no idea what happens behind the scenes. This is a great representation of the Ninja community.