(This is Part Two of this story. Please see yesterday’s post for Part One.)

The day my Uncle Rocky died I was heartbroken, but I knew I had to tell Josh and Jaime. I still remember feeling perplexed and disappointed. I didn’t remember ever believing so strongly that God would heal. I had so wanted them to witness a real miracle...

Then that “still, small voice” all believers have heard at one time or another crashed through my confusion and sadness. Uncle Rocky had been healed! While cancer was the presenting issue in his life, it was simply the door to a bigger, more deathly problem: his sin. God used cancer to awaken him to a false belief that he had become a Christian at a young age, and by His amazing grace, Uncle Rocky was converted. His salvation brought peace and joy he had never known, and gave him assurance that he would spend eternity with the Savior he had come to deeply love in a few short days.

And with his death came freedom from the cancer, pain, mental confusion and violent seizures from which he had been suffering for months.

This reminds me of Jesus’ powerful words in Mark 2:9: “Which is easier, to say to the paralytic, ‘Your sins are forgiven,’ or to say, ‘Rise, take up your bed and walk’”? 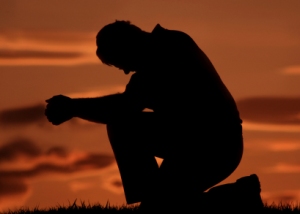 Why was I not viewing what happened as a glorious miracle? Because my prayers weren’t answered my way. My uncle, who had lived decades separated from God while having false peace that a prayer spoken when he was young had given him his “ticket” to heaven, had been miraculously saved just weeks before his death! God had used his suffering and pain to draw my uncle to Himself and had opened his eyes to his need for a Savior. Rather than becoming bitter and angry at God about his suffering, Uncle Rocky’s heart was softened to the particular and personal love of God…for HIM!

When I told Josh and Jaime how God had answered their prayers, their childlike joy was contagious. They had no problem seeing that Jesus had been listening.

Like me, maybe you are walking through some difficult situations. Do past prayer “failures” tempt you to lack faith and expectancy that God will hear and answer? Are you protecting yourself from the possible disappointment of God not doing what you want on your timetable by neglecting to run to the throne of grace with childlike faith?

In a couple of discouraging things going on in my life and with people I love, I have to answer “yes” to these questions.

I’m ready to become like a child again. To stop thinking that answered prayer means God has to do things my way. Honestly, I’m a little afraid to start praying with simple faith about the situations that are weighing on my heart. What if the answer comes in a way that perplexes or disappoints me…again?

Then I think of the 30 years Uncle Rocky has been enjoying heaven cancer free: three decades of worshiping his Savior and enjoying the sin-free life Jesus purchased for him. I’m sure he doesn’t regret one single day.

I’m grateful that my toddlers, now parents with little ones of their own, got to witness a bonafide miracle at such a young age.