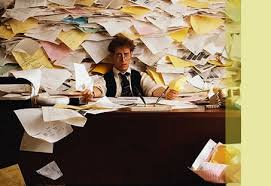 The issue of what it means to work, where we should work, and how the gospel applies to our work is an important issue, and one that Alex Thermenos somewhat addressed in an earlier post. We want to look at the issue more in-depth; this is Part I of a series on “Work and the Gospel,” and I want to address an issue that is relevant to whatever “work” we are doing. What does it mean to have a biblical work ethic?

To answer the question, let’s follow Inigo Montoya’s advice and “go back to the beginning.” People often think of work as a response to sin – that’s why we hate work so much. Our jobs are supposed to be horrible because after Adam and Eve sinned, God cursed them and said work would be hard and childbearing would be painful and all that jazz. But of course, that’s not true. Work preceded sin. Genesis 2:15 says that God put Adam in the Garden of Eden, which God had already created for the benefit of Adam, to work and take care of it. Work is a response not to sin, but to the blessing of God.

Wrong views of a biblical work ethic tend to fall into one of two camps. The first thinks that a biblical work ethic means that we take Solomon’s command to “consider the ant…” seriously, as if our lives should be like ants. We work all day on projects and jobs that are entirely too big for ourselves, so that we can build a sweet house we spend hardly any time in, for our families we don’t talk to because winter and grasshoppers and the IRS is coming. The second tries its best to sound like Tyler Durden, striking a countercultural pose as it critiques work itself existentially, finding it ridiculous that we would work at jobs we hate so we can buy…stuff…we don’t need.

Both views are viewing work the wrong way. In both perspectives, the viewer sees work only a means to an end, a way to get to the weekends and nights where we do stuff that actually matters, even if one idealizes yachts, pools and martinis and the others idealizes anti-establishment conversations with likeminded companions who also refuse to be cogs in a machine and slaves to success.

So what is a biblical work ethic? Obviously, I don’t have specifics. Here are a couple of things that probably aren’t very mind-blowing that should determine our own work ethic.

At the very least, our work ethic should include the conviction to work hard. While avoiding overwork, it is important to remember that Scripture is clear that “whatever your hand finds to do, do it with all your might.” (Ecclesiastes 9:10). It seems that, at least in this verse, God is less concerned with what we are doing (vocationally) than in how we are doing it. There is a reason while studying history I noticed even non-Christian professors took pains to mention the “Protestant work ethic” was one of the major factors determining the USA’s place as a world power so quickly after its birth. The Protestant work ethic was not an accident of history, but the result of a people that took God’s commands in places like Ecclesiastes and 1 Thessalonians and Genesis seriously. Our idea of work should not be determined by the cultural ideal of weekends, 40 hour weeks, and working hard merely so we can play hard. It should be informed by biblical commands, by resting on the seventh day because of how hard we’ve worked for the previous six.

WORK FOR GOD, NOT FOR MAN

Colossians commands us that “whatever you do, work at it with all your heart…”, continuing the theme of working hard. But for what purpose? So that we’ll be noticed? So that we’ll get recognition, or a promotion, or more money? Not quite. We are to work hard “…as if working for the Lord, not for men.” The reward for our work is ultimately not our paychecks or retirement, but our inheritance from the Lord.

Flowing out of that same command from Colossians is the requirement to work with gratefulness. Ephesians carries a similar command, and a promise that God will reward each for his work. We know that God has blessed us and will bless us, and our work flows out of gratefulness to Him. We must avoid the temptation to work out of bitterness, either at the fact that we are working a job we don’t like or at others who don’t work as hard as we do. We must avoid the stereotypically conservative notion that we have somehow earned our jobs and our money, that we deserve what we have and that no one, not the government, not the poor, lazy bums who want handouts, can take that from us. You didn’t earn your job, or your money, or your health, or anything. What you have was given to you, and remains yours only because of the inexhaustible and unexplainable mercy of God. We must also avoid the stereotypically liberal complaint against those who are higher on the totem pole than we are, blaming anyone who is richer, or entitled to their daddy’s trust fund, or frolicking about on their golf courses and country clubs that we (WE!) allow them to have through our unappreciated labor. VIVA LA REVOLUCIONE!

In conclusion, our work should be done with diligence and gratefulness; our work should be vertical, not horizontal. After all, Christ has already done the best work and the most difficult job on our behalf, by laboring on the cross for our sins. He didn’t punch out at 5:00:01 P.M. to go get drinks with the disciples. He didn’t take a day off from being perfect because he was tired, or had a headache, or because the 4th of July fell on a weekend and that isn’t fair. He also didn’t spend 100 hours a week perfecting the latest broken chair while ignoring the sick and the needy. He wasn’t so concerned with his job that he ignored his family (“Mother, behold your son; son, behold your mother.”) He did all things well, and in doing so made all things new, because He knew who He was working for, what He was working towards, and who he was benefitting along the way.